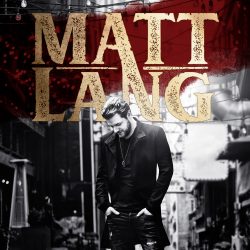 New album More is out now

In the spring of 2018, Matt Lang was on his way to Nashville to record his first English-language album, and at that time, he didn’t speak a word of English. Produced by Danick Dupelle, a Québec producer who has lived in Nashville for nearly 18 years and isa member of the popular group Emerson Drive, the album quickly made its way to No.1 on the national iTunes Country Albums chart for multiple weeks in early 2019. By that time, Matt was mastering the English language at a rapid rate and is now all but fluent, adding language skills to his long list of talents.

Matt’s focus tracks from his first EP, ‘Love Me Some You’ and “My Final Pour,” have performed brilliantly on streaming platforms with total EP streams exceeding 7.5 million to date. Proudly from Maniwaki (QC), Matt has always wanted to bring Nashville to Québec – from 2018 to 2020, Matt performed over 150 live shows to ever-growing crowds. In Québec, it’s hard to get tickets to a Matt Lang show before it’s sold out. He and his band opened for Tebey on ‘The Good Ones’ tour in Ontario and Western Canada, and they also performed their first European shows in March 2020 at the prestigious C2C Festival in Berlin. In addition, he was booked to perform at C2C London, UK, before COVID-19 forced Matt and his band to return home early.

Matt has long dreamed of having an international career and is on his way to achieving this quickly. His warm and powerful voice, combined with his impressive live show, quickly got him noticed by the Canadian country music community in English Canada, and in February 2019 he was signed to new record label and management company, Jayward Artist Group Inc. Based in Toronto, Jayward was founded by successful singer/songwriter/producer, Tebey, and veteran artist manager and label executive, Jill Snell. The label is distributed by The Orchard and promoted by Sony Music Canada.

In September 2019, Matt won the national SiriusXM Top of the Country competition,three prizes at Québec’s Country Gala, SOCAN’s Country Music Prize and got his first ADISQ nomination for English album of the year. He is currently finishing his 2nd English album, set to be released in June 2020. The first single off of that album, ‘Water Down The Whiskey,’ was released to all media outlets in August 2019. It was the most-added song across all formats upon release, reached Top 20 at Canadian country radio, and has soared past a million streams – all in short order. Exciting things are on the horizon for this legitimately talented performer, follow him now to stay in the know!

View all products
When you have nothing to post, show off your mulle

Our single Only a Woman is climbing the country ra

So proud of my buddy and bassist @danmoranville wh